The application targets the “secrecy and taboo” around menstruation


The onset of their period can come as a shock to girls in developing countries; many are so ill-informed that they fear dying.

“If you’ve never been told about your period, you think of the worst,” says Gerda Binder, regional gender advisor for East Asia and the Pacific at Unicef, the United Nations agency for children. . “Girls from these regions. . . find it particularly difficult to know where to turn for help and advice, the subject is surrounded by so much secrecy and taboo.

Rose Caldwell, Managing Director of the UK branch of Plan International, the global charity for children’s rights and girls’ equality, agrees: “The stigma and shame that often surround menstruation is both a cause and a consequence of gender inequality. Girls around the world don’t go to school because of their period; in rural India, for example, 20% of girls drop out of school after having their first period. “

These fears may soon be allayed in Mongolia and Indonesia with an app from Unicef ​​- Oky – which helps educate girls about their bodies and understand their symptoms. The app includes a predictive algorithm for period tracking, a visual summary of data, and a searchable repository of evidence-based information tailored to girls on topics such as period hygiene, puberty and myths.

Designed to be simple to use, Oky has a playful feel. “It provides a daily journal where girls can use emojis to record their mood, bodily symptoms and activity,” Binder explains. This could include if they have socialized, exercised, and what they have eaten. “Girls can also write this in a more personal way as if it were their diary,” Binder adds.

Oky was developed and tested in collaboration with 400 girls in Mongolia and Indonesia, both remotely and in face-to-face workshops. The pilot showed that girls have less experience with digital devices than boys – navigating an app and swiping isn’t second nature to them, Binder says. “They learned to follow a menu bar, but you can’t assume they already knew that.”

Oky takes up minimal storage space, as girls in developing countries usually have low-end phones with little room for large apps. It also works offline, as internet connectivity can be poor and data costs prohibitive. Phones are often shared, so password protection is essential, while personal information remains in girls’ private accounts on the phone.

Unicef ​​collects anonymized data to track how often and for how long girls use the app and whether they are improving at answering quiz questions.

The app will increase knowledge about menstrual patterns, says Binder, adding: “It is possible to educate the public health and trade sectors about the support needed and how policies, products and services should be made. be shaped. “

Oky is aimed at girls ages 9 to 15 and is accessible without registration – a feature aimed at providing general information to fathers and brothers, Binder says. “We hear a lot about boys and men who want to know more about what is still too secret, so that they can provide more support. “ 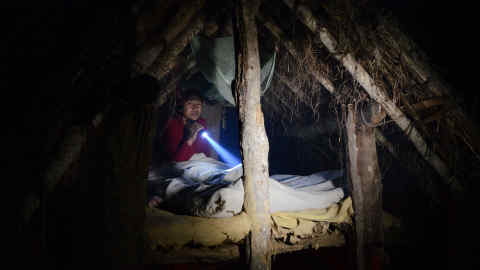 Among the social taboos that girls face is the fact that menstruation is dirty, unclean, and women have to live outside the family home for five days (Nepal) and not go out (Philippines). In Cambodia, it is customary to keep the first sanitary napkin, and in Indonesia, girls are told not to eat pineapples, eggs, peanuts, bean sprouts and sweet, sweet and sour foods. or spicy. A 14-year-old girl was told that during her period she should not pray, fast or wash her hair.

Some girls who helped test Oky said they realized their periods are normal and lost their feelings of shame about menstruation.

Binder says the girls have suggested improvements for the app, including suggestions for what kind of clothes to wear and what foods and drinks to consume during their period. Another potential addition is a chatbot to provide personalized advice in response to questions on intimate topics. “The chatbot would be like a private conversation, using AI to help it understand what the girls are asking,” Binder explains.

Oky will be free to download from Google Play and users will not need an email address. While waiting for the coronavirus, the launch is slated for May 28 on Menstrual Hygiene Day, a global initiative to raise awareness and change negative social attitudes towards periods.

Unicef ​​hopes business, nonprofit and public sector partners will develop Oky in countries such as Kenya, Tajikistan, Brazil and Pakistan, possibly alongside programs on health, education. , water and sanitation.

Oky is written in open source software so that it can be easily adapted and integrated with other applications.

“Menstrual health, education and dignity are essential if girls around the world are to live their lives and go to school without shame or insult,” says Caldwell. “We need to end the stigma and taboo surrounding periods, and ensure that girls have the information they need to feel in control of their own bodies. This app should make a welcome contribution to both of these areas.