The Ubly community gathered on the school’s soccer field last Saturday to pay tribute to the immense impact longtime teacher Nancy Elliott has had on generations of Bearcats. (Photo by Paul P. Adams)

UBLY – – During her four decades at school, Ubly’s teacher Nancy Elliott had a senior English project that became quite well known.

The project involved each student building a kite, writing on the kite, and finally pulling the kite out for (hopefully) its maiden flight.

Ubly’s superintendent, Joe Candela, was a former student of Elliott, as were what he estimated to be half of the school’s current staff. Candela doesn’t remember if her kite actually took off on her big project day, but he vividly remembers the project itself, the class, and most importantly Elliott.

â€œMrs. Elliott was a fantastic and phenomenal English teacher,â€ Candela said. â€œEveryone will tell you that when you left Ms. Elliott’s class you could write – you knew English.

Last Saturday, May 29, the Ubly community gathered on the school’s soccer field to honor Elliott’s legacy by flying a kite. The organizers called the event Flying High for Nancy. 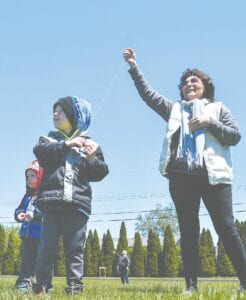 Despite Elliott’s death earlier today, it was a joyous event – as per Elliot’s request. (Photo by Paul P. Adams)

Elliott was recently diagnosed with a terminal illness. Hearing the news, Jill Ebel, who graduated from Ubly in 2004, had the idea of â€‹â€‹paying tribute to him.

When approached about the idea, Elliott was on board, with one stipulation: it was to be a celebration of life, not a sad event. If the organizers could promise that, Elliott would do everything in his power to attend.

However, last Saturday morning – just hours before the big celebration – word came that Elliott had passed away.

â€œThe day after Nancy announced she had cancer, I spoke to her on the phone and she said she liked the idea and hoped she could be here,â€ Ebel said. “She was really excited about it.”

Despite the heartbreaking news, community members did their best to make the event a joyful one, joining together to share Elliott’s commitment to the area and fly a kite for the beloved teacher. .

â€œShe was expecting so much today. She was excited about it, she just wanted to see her students again, “said Janice Sageman, a 1975 Ubly graduate.” I spoke to her (Friday), and it happened so quickly. She would love to see the participation.

Sageman said Elliott was such a devoted teacher and friend that she has continued to help Sageman in life, well beyond the classroom.

â€œAfter school I ended up getting a divorce and she got divorced around the same time,â€ Sageman said. “She ended up calling me to ask if I wanted to have dinner?” We have been best friends ever since. Since then we have had a stand up dinner Thursday night.

According to Candela, Elliott has always been dedicated to the community and its people. He estimated that Elliott had taught over 6,000 students in his day.

After her teaching career, Elliott served on the Ubly school board for six years. Although she came to Ubly as an “outsider,” she learned to love the community and ended up never leaving it.

Candela described her as “having a passion for Ubly”.

â€œShe’s just a big part of Ubly and we just wanted to pay tribute to her,â€ he said.

â€œShe was a big supporter of the school long after her retirement,â€ Ebel added. â€œThe number of people she has touched is crystal clear. Because he got together in a week and brought in people from all over the state, that means something. It’s very heartwarming and really great to see people come together like this.

On Saturday, community members young and old came together to spend a great day flying kites, socializing and reflecting on a memorable life that Ms. Elliott lived.

Despite the sad start, the day turned out to be a great way to say goodbye.

â€œI’m smiling, it’s nice to see so many people,â€ Sageman said. “I’ll cry later, I’m sure, but Nancy would have really enjoyed it and I’m glad it went so well.”

Ebel added, â€œI think she’s looking at those kites from the sky. I really do. ”